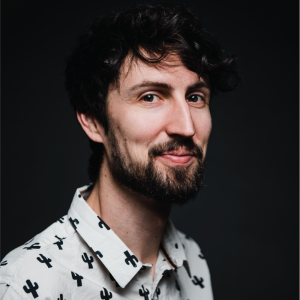 In 2015 David Rodriguez burst onto the Colorado comedy scene by winning Denver Comedy Works’ prestigious New Faces Competition (previous winners include Adam Cayton-Holland and Josh Blue). In 2016, he proved it was no fluke by taking 1st place in the Stand-up Showdown at the Denver Improv, and then in 2017 he won the Comedy Works’ Funny Final Four.

He has been recently featured on NPR for his standup and has performed on several great festivals including the Altercation, Bird City, Limestone, and High Plains Comedy Festivals as well being selected to the New Faces showcase at Just For Laughs in Montreal in 2018.

Audiences of all ages and backgrounds respond to his vibrant comedic style, which is a mix of animated story-telling and insights into being a responsible young parent living in a generation where growing up is generally frowned upon.

When he isn’t performing at clubs and indie rooms across the country, he is at home with his wife and two kids and small dog trying desperately to nap.

When he isn’t performing at clubs and indie rooms across the country, he is at home with his wife and two kids and small dog trying desperately to nap. 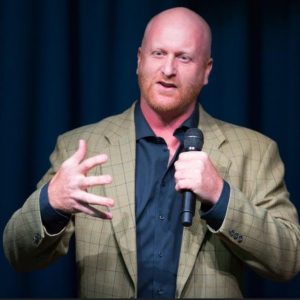 Raised a Jehovah’s Witness in Aspen, Colorado, Louis has seen it all and you see that in his humor. From construction, to cubicles, to new fatherhood, dogma to drug addiction, his quirky, but relatable irreverence touches on every subject available.

Seats will be assigned to ensure proper 6’ social distancing between parties. Assignments will be based on the number of people in a group and made at the discretion of Parker Arts. Parties of more than 6 must be separated but will be seated in the same general area when possible. Tickets with seat assignments will be emailed 3-5 days in advance. If you forget your ticket, we will have your name on a list and can direct you to your seats. For ADA accessible seating, please call 303-805-6800.

Face coverings and social distancing are required, and we will be disinfecting seats, surfaces and restrooms frequently. PLEASE STAY AT HOME if you are experiencing any of these symptoms: cough, shortness of breath or difficulty breathing, fever above 100.4, headache, repeated shaking with chills, muscle pain, sore throat, new loss of taste or smell, fatigue, congestion or runny nose, nausea or vomiting or diarrhea. Holder assumes all risk associated with the Event(s) including, but not limited to, injury, illness or death resulting from actions or inactions of producers, performers, spectators, and other third parties.