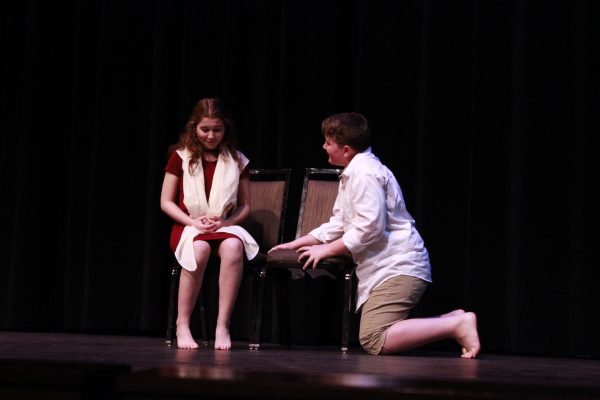 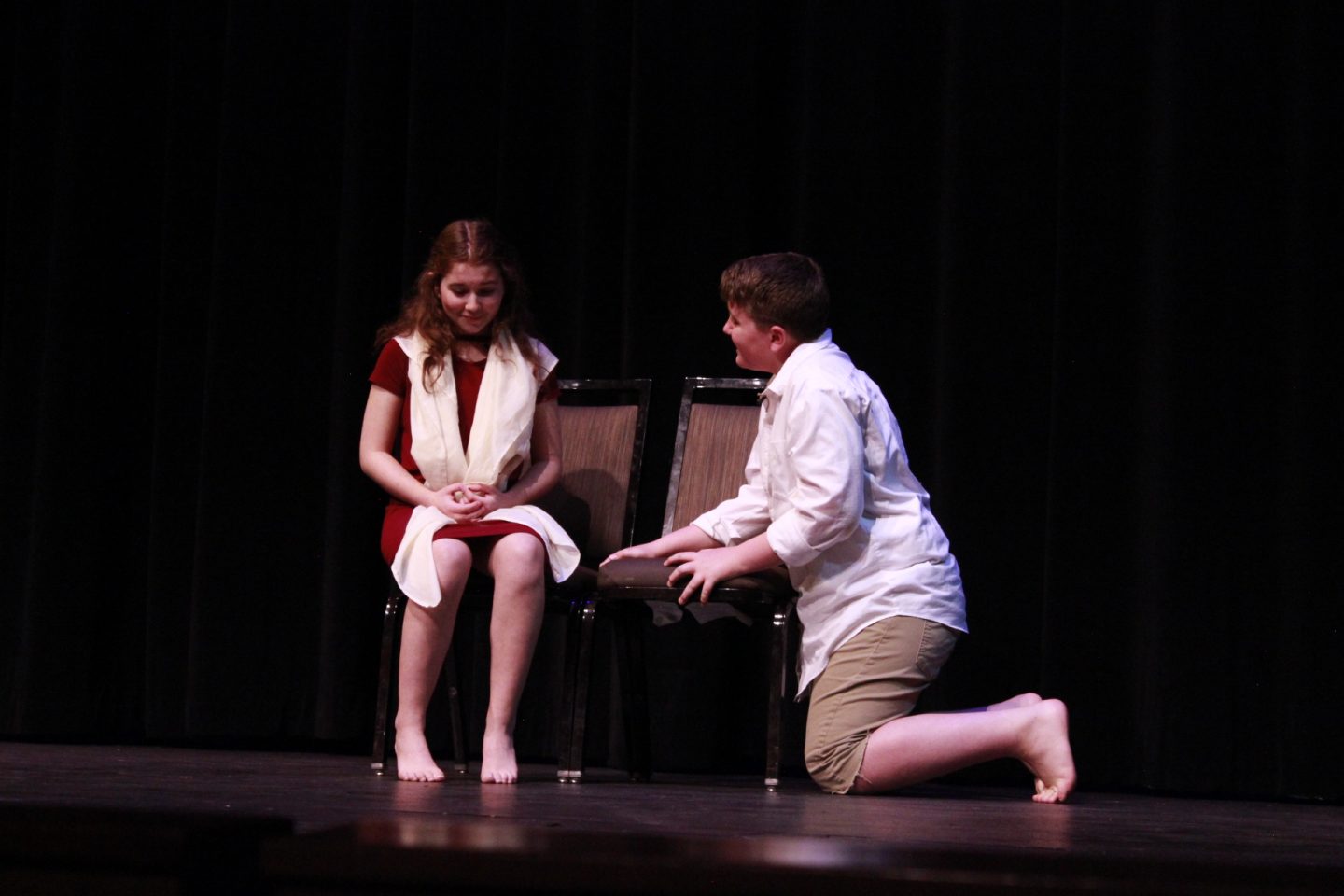 Student groups/soliloquies will perform a scene or part of a scene from one of William Shakespeare’s plays.

Group scenes should be between two to five minutes. The number of actors in a group is determined by the number of roles in the scene being performed.

Soliloquies (monologues) should be between two to four minutes. A student performing soliloquies must include two contrasting Shakespeare monologues (one comic; one tragic).

Groups/soliloquies will perform the same scene twice on two different stages. Each performance will be judged.

Shakespeare’s exact written words must be used. No paraphrasing or adaptations are allowed. Cuts or condensed formats are permitted, as long as the language is maintained. (Example: combine two sets of lines for an actor by eliminating a character’s lines that are not necessary in order to fit the time line.) Please do not attempt English accents.

Students must arrive in costume and stay in costume throughout the festival. Costumes will be judged.
Costumes may be “period,” similar to those of Shakespeare’s time, or other historical time period, or conceptual, as long as they are cohesive, appropriate and enhance performance. Costumes should be simple and need not be rented or expensive. Everyday attire is not encouraged. All student props should fit within a 12-gallon tub (22”x15”x12”).

Creative interpretations are allowed. For example, Romeo and Juliet set in the 1950’s or Macbeth in Star Wars garb, as long as the concept is consistent, cohesive, and enhances the performance.

School Coordinator
The School Coordinator oversees the selection of groups, scenes to be performed, rehearsals, and costuming. These activities should be student-directed as much as possible, depending on student experience and skill level. The School Coordinator is responsible for coordinating an audition date, time and location for their school groups, as well as in-school communication, parent communication and permission forms, and overall supervision and coordination of the school’s participating groups at the Festival.  Additional chaperones are strongly encouraged. Parker Arts is not responsible for participant and spectator supervision will not be held liable for their actions.

Auditions
Each school may have up to ten groups audition (including soliloquies). Three to four groups will be selected to perform at the Festival. All group auditions will be conducted by Parker Arts judges at your school on the same day determined by the School Coordinator and Festival Coordinator. Each group must provide two Performance Evaluation Forms with participant information completed and one copy of the excerpt from Shakespeare’s play to the judge(s). Group scenes should be between two to five minutes. Soliloquy scenes should be between two to four minutes and include one comic and one tragic soliloquy. Students should be in costume, but pictures or sketches of costumes are allowed at auditions. Judges will take page one of the Evaluation Form and the scoring rubric will be returned to the School Coordinator at auditions.

Festival Arrival and Attendance
School groups must arrive in costume at the PACE Center by 8:30 a.m. Schools will receive a packet of maps and schedules at the information table and then proceed to the theater for the Opening Ceremony. Students are encouraged to attend the entirety of the festival in order to take advantage of the festival activities including: watching other school performances, attending workshops, and attending the Closing Ceremony and the Bard Award showcase from 4:00 p.m. – 5:00 p.m.

PACE Center Stages
Performances will take place at pre-scheduled intervals on various stages throughout the PACE Center. Stages will be approximately 15’x10’. Stage props available include: 1 table and four chairs.

Performance Evaluation Forms
Groups and soliloquies should complete the participant information on the top half of this page for each group/soliloquy performing. For auditions: make two copies, plus one Shakespeare scene script. For performances: make four copies and give two copies to the judges at each stage, along with one copy of the Shakespeare script being performed at each stages.

Lunch
Students should bring a lunch. Drinks and snacks are available for purchase from PACE Center Concessions throughout the day.

Questions
Direct all questions to Parker Arts Education at 303.805.3374 or PACEedu@parkeronline.org.